So with the collar popped on my trench (to mask the almost instinctual screw face to questionable fashion) I entered the Mik Cire by Eric Kim Fall Winter 2010 show during fashion week hoping to be thrilled but secretly terrified for more of the uneventful. As the show began with its part military part nomad inspired, dark assortment of washed greens, browns and blacks reminiscent of moss, calamata olives, cocoa and asphalt, I noticed my neck had started slowly rising from my trench.

What peaked my interest was a well-edited and most notable grown-up collection. There was a skilled and hard-edged handling of skins in suede jackets with double sided zips and wearable bondage-esque bombers with leather sleeves and buckled straps. Button down shirts were given the military meets minimalist air with toned down epaulets and flattering pocket placements. Pea coats, car coats and overcoats in those washed greens, browns and blacks worked very well when paired with zippered wool fingerless gloves, soft knit skullcaps and non-fussy scarves swaddling the neck. Shorter jodhpur style pants (a trend next season) came off more plausibly wearable than costume-like with the aesthetic of the collection especially when paired with long johns and slung on the low waist. Kim’s attention to small details such as clever seaming, fraying and piping placement will attract his modern cosmopolitan soldier to strong familiar silhouettes with refined elements. 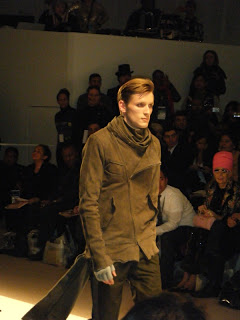 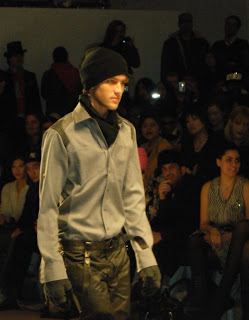 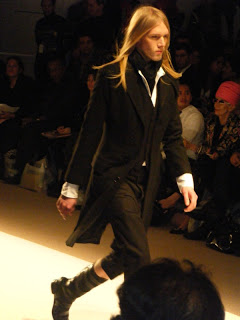 Further, while I could do with a more unstructured (and smaller) bag, I see his continuation of the refined and familiar in his use of textured leather and pony on shapes that could easily stow away a weeks worth of clothing for a getaway. I think that was part of the point though; to rework the strong recognizable elements and approach ideas that work for men in a forward, wearer- friendly way (the pea coat, the short overcoat, the gloves, the long johns, the suspenders, the ruff sack, etc.) 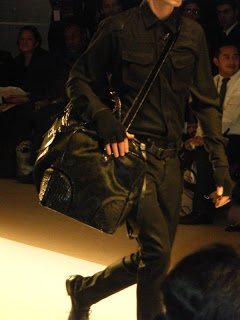 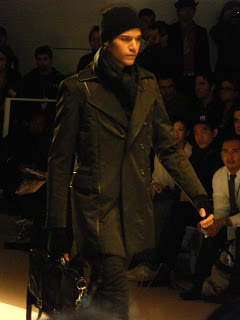 Good first start for Mr. Kim under his namesake. The buyers will like it, those with more refined and darker tastes than Monarchy will like it and he’s bound to attain a crop of new soldiers eager to grow with his vision. And for those of you who were wondering, the show ended with Mr. Kim and his toddler son taking a wave, my collar down and my expression all smiles…..yes all smiles. DW.