The Art Institutes Fall/Winter 2015 Student Collections
March 2, 2015 Glasgow Skinner Collection Previews
The Art Institues Fall/Winter 2015 Student Collections at Mercedes-Benz Fashion Week opened with quite the powerful message. Megan Silcott, an 18 year-old living with a rare neurological disorder that has caused her to be paralyzed below the neck, opened the show by walking the entire length of the Theatre ‘s very long runway with the assistance of only a walker as a model of designer Nina Perdomo’s collection. Twelve designers from The Art Institutes showed their Fall 2015 collections. Along with Nina Perdomo, collections were presented by Grace Ahn (menswear), Jamaree Eiammanassakul, Romina Vairo, Alexa Dibiasio, Sebastian Cubides, Jesus Romero, Parker Trumble, Chutian Zhog, Daniela Ramirez, Yalary Fuentes, and Zong Peng. 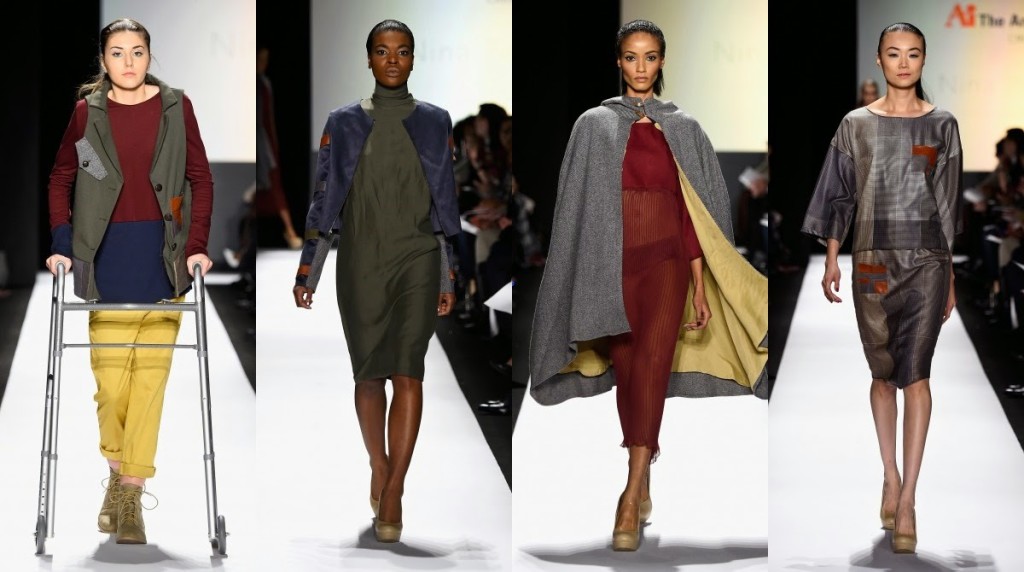 One of our favorite collections, Nina Perdomo’s Paradigm Collection is for the woman who is confident, and likes a wardrobe of edgy silhouettes, textures, colors, and prints. 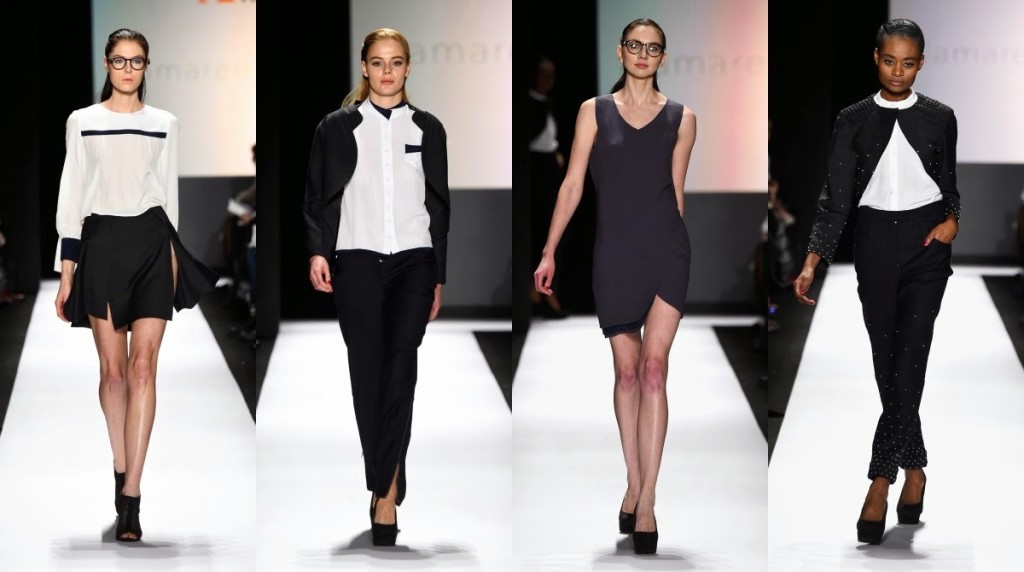 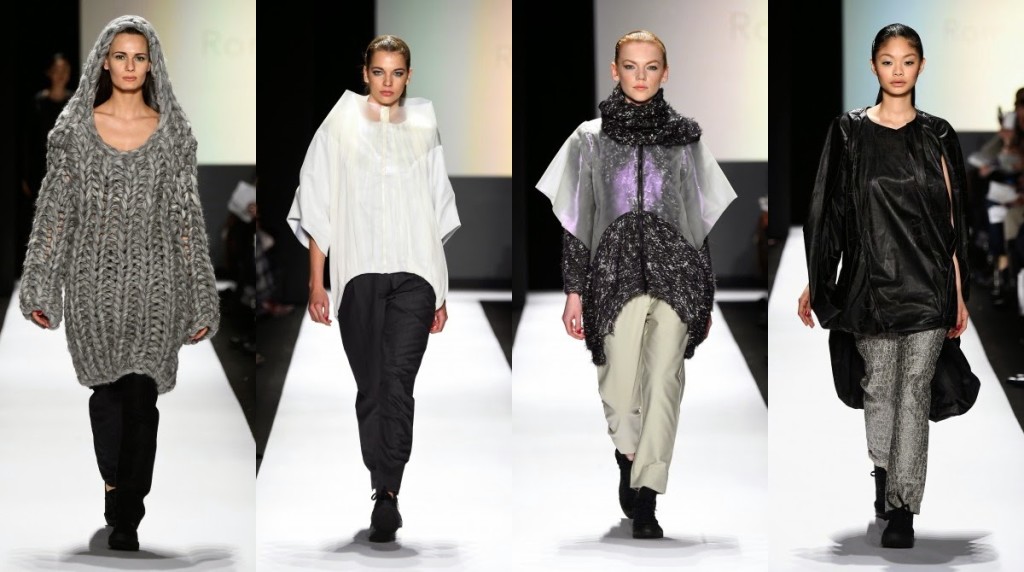 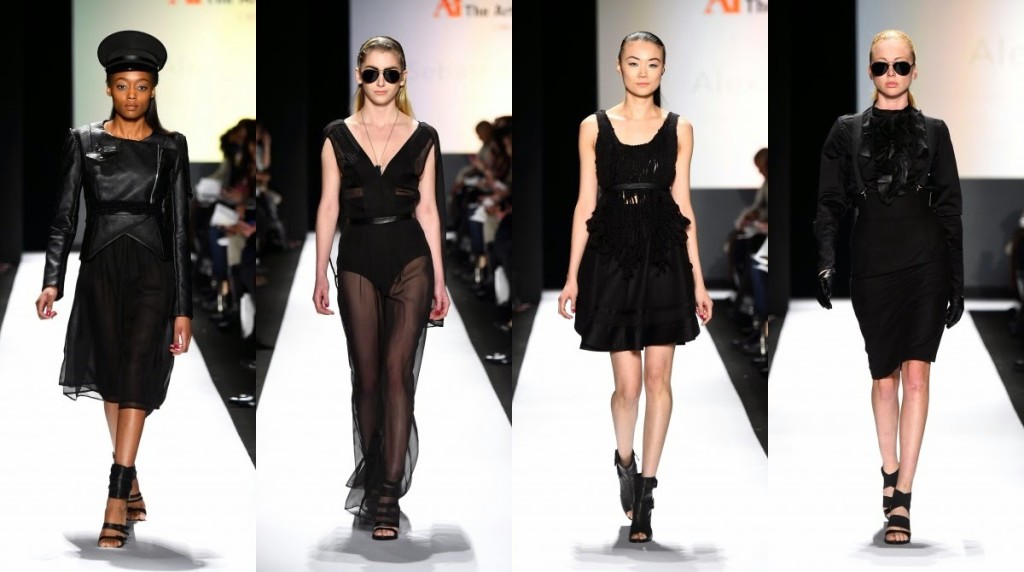 This collection boasts fierce style and edgy beauty. With this edgy feminine collection, Designer, Alexa Dibiasio, believes every woman deserves not only to be beautiful, but interestingly beautiful by letting her style speak for itself. 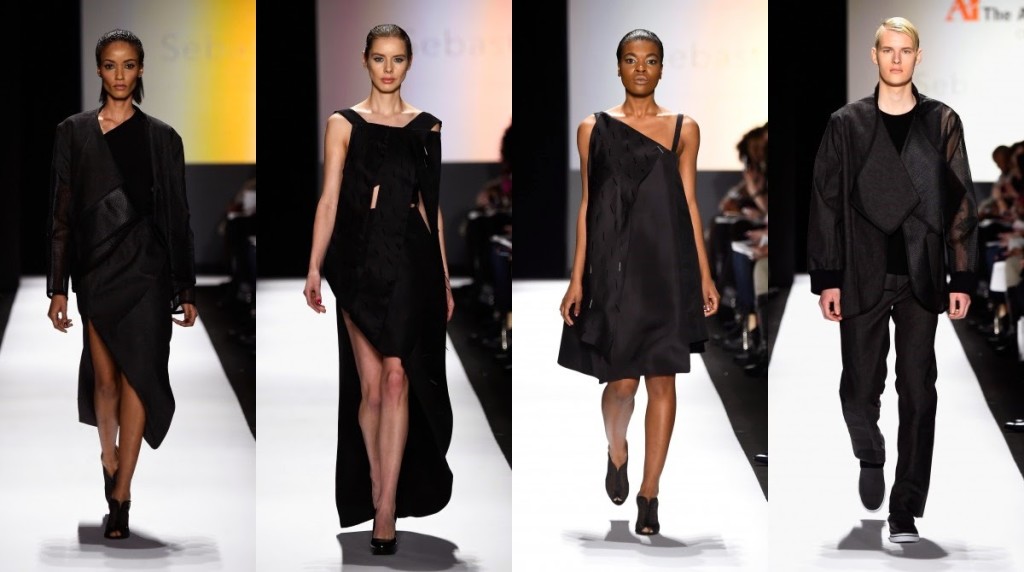 Although Sebastian Cubides designs both men’s and women’s fashion, we’re concentrating on the womenswear. For this collection, he experimented with shapes and silhouettes and the result is this stunning collection that boasts non-traditional and non-conforming looks. 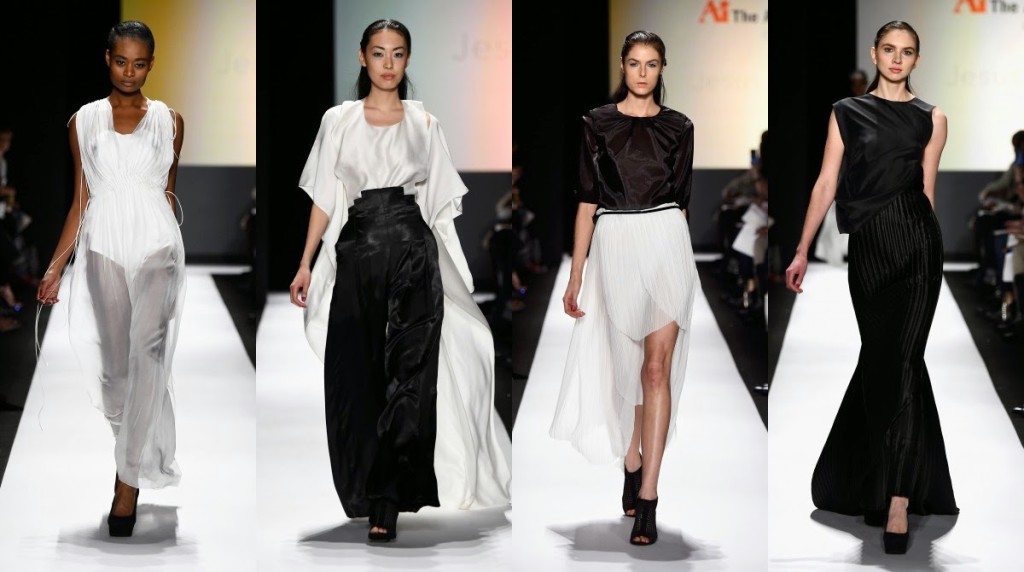 Another favorite is this sultry collection by Jesus Romero. Inspired by the glamorous Marlene Dietrich and the spirit of the 1930’s, the black and white collection celebrates the highlighted the designer’s passion of three dimensional design development. 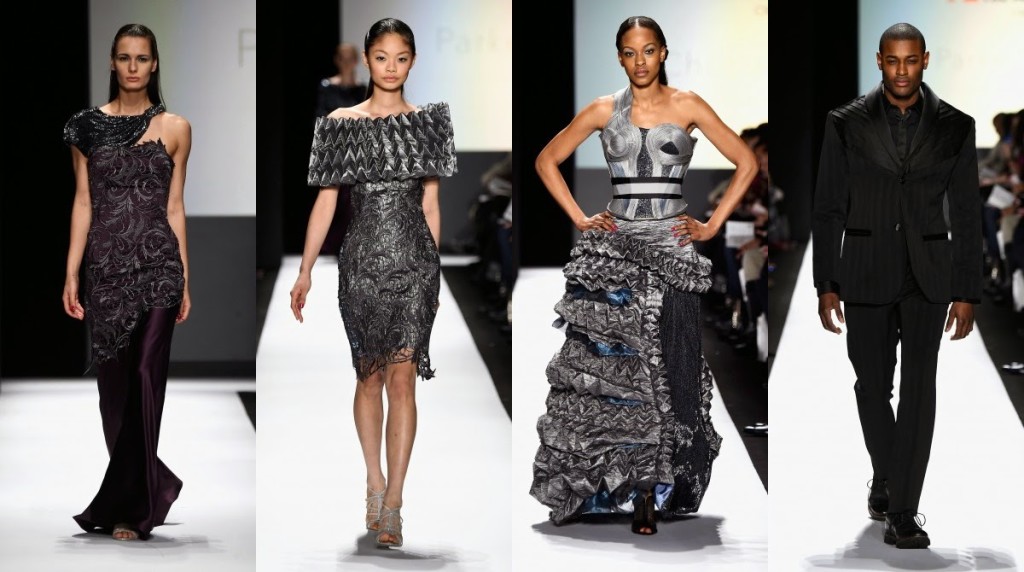 Offering both men’s and women’s fashion, Parker Trumble takes us to the future with a mix of organic, and industrial geometric feel, but yo us, some looks had an old world aesthetic which really appealed to us. 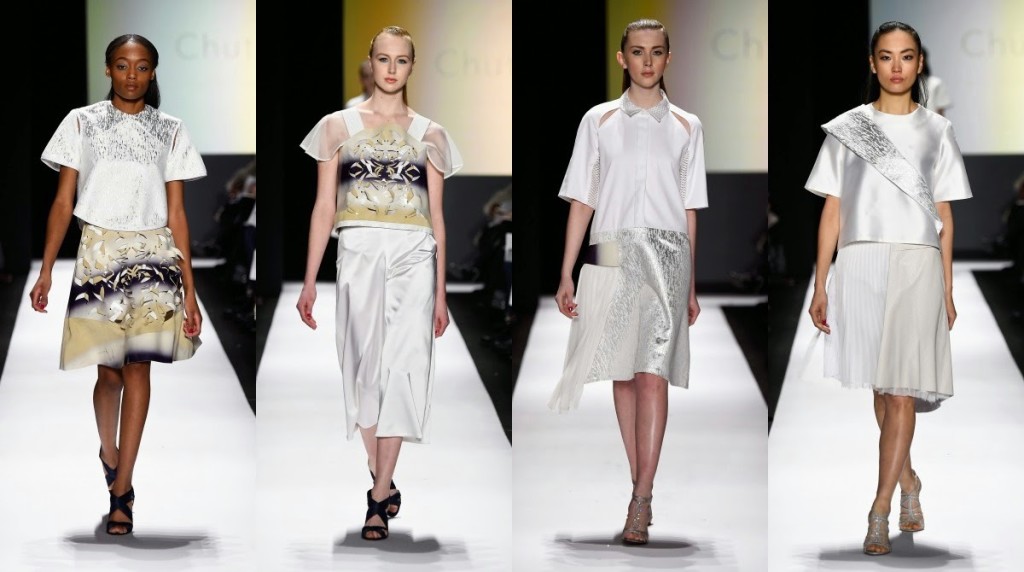 There’s more to love than the intricate cutouts in Chutian Zhog’s collection, which he used to represent the hard and soft strokes of Chinese Calligraphy (his interpretation of the revered Chinese art of writing), the contrasting fabrics, spray painted suede and punched leather. 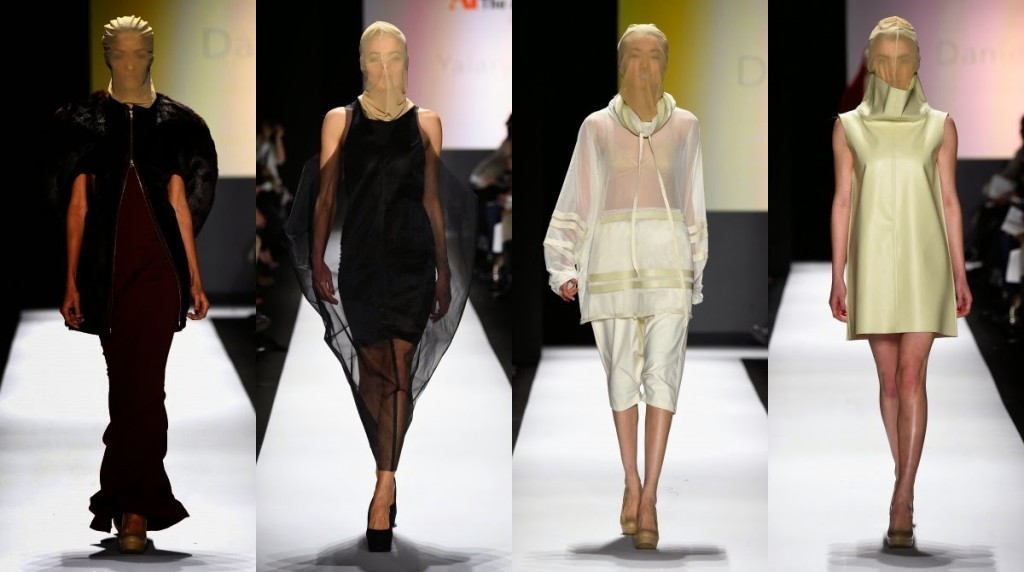 With a design inspiration that features bold, yet minimal silhouettes, and influences from her architect father, her Mexican roots, and the cultural diversity of San Francisco Bay, the modern collection could really be what we could be wearing in the future. 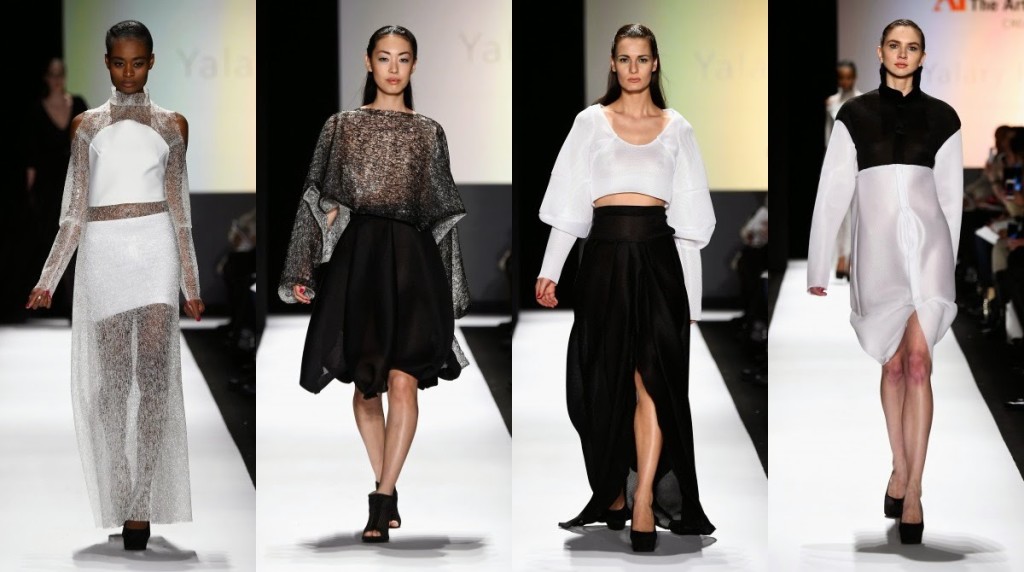 Born to a family of artists, Yalary Fuentes’s collection is inspired by the architectural works of Zaha Hadid, who is known for the curves of her elongated structures (we’re huge fans of her footwear collaborations). Her pieces feature a “rounded” look, which perfectly captures her inspiration.